Provoking, daring, and fluid constructions from Zaha Hadid that inspire

Architecture is like writing, you have to edit it over and over so it looks effortless.

Last week, 31st of October Zaha Hadid would become 70 years old. We would like to pay tribute to such a provocative architect known as “Queen of Curves”, who redefined architecture in the XXI Century. Her projects symbolize social progress, design of the future due to her futuristic shapes, curving facades, and fluid structures that she pioneered in architecture.

Beauty is closely intertwined with meaning in her projects. Award-winning buildings quite often imitate the sensual contours of the female shape. Just to recall the provocative design for the 2022 FIFA World Cup Al Wakrah Stadium in Qatar that looks like a female vagina or Dubai Opera House that resembles a female breast.

From Miami to Australia, UAE to China, Zaha Hadid’s architectural constructions were truly phenomenal. She received the highest honors from professional institutions across the globe. In 2004 Zaha became the first female awarded the Pritzker Architecture Prize and Forbes listed Zaha as “The Most Powerful Women”.

Without any doubt she deserved it all. Once Zaha said: “All the privileged can travel, see different worlds; not everyone can. I think it is important for people to have an interesting locale nearby.” Her masterpieces spread around the world and inspire people in place. Let’s look at Zaha’s most notable and futuristic constructions – a legendary legacy that truly galvanizes.

“It’s an architectural landscape where concepts of seamless spatial flow are made real – creating a whole new kind of civic space for the city,” Zaha Hadid commented during her speech while receiving the Designs of the Year award in 2014 at the Design Museum’s annual international competitive exhibition.

So true, the unique building became a symbol of the new epoch evoking hope and bright future for the nation with Soviet legacy.

King Abdullah Petroleum Studies and Research Center also known as KAPSARC is a non-profit institution for independent research into global energy economics. In 2020 it was recognized by the University of Pennsylvania Think Tank and Civil Societies Program as one of the top global energy research institutions.

Also it has been named Saudi Arabia’s ‘smartest’ building in the Honeywell Smart Building Awards programme. In reality, this cosmic construction reminds me of an Interstellar ship. The complex consists of five interlocking buildings, a research center, a computer center, a conference center, a library and the Musalla, a place for prayer which is “the first place for prayer in the country designed by a woman”.

Its interior space resembles a modern theater or exhibition hall rather than a scientific research laboratory.

According to ZHA, the Morpheus Hotel located in City of Dreams, Macau is the “world’s first free-form high-rise exoskeleton“. Its design is intriguing, its shape attracts with the structural integrity and external resembling of figure 8 emphasizes its uniqueness never seen before.

Incredibly talented Zaha and her outstanding projects always inspire the Viewst team. Her heritage for us is more about design exploration. That’s why we decided to develop a series of pre-designed ad banner templates followed by her unique style and aesthetics. We believe that the best designs could be applied anywhere, in particular, in web banner creation. Such ad banners without any doubt will stimulate users to learn more about the offering.

Go to viewst.com and grab your favourite one. 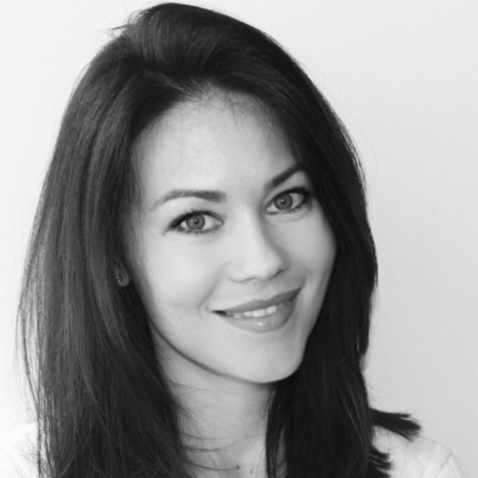 1. Heydar Aliyev cultural center, Baku
2. King Abdullah Petroleum Studies and Research Center, Saudi Arabia
3. Morpheus Hotel in Macau
4. Here are a few templates you will definitely love as we do